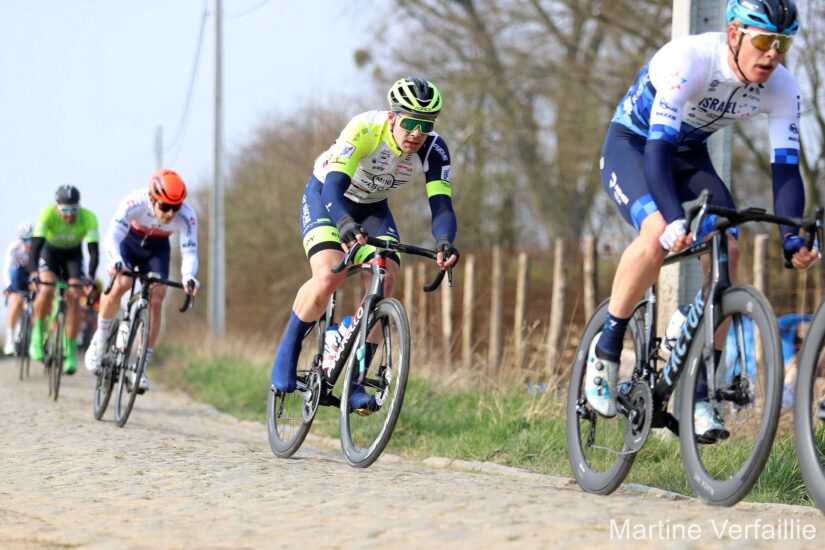 GP Criquielion was my first u23 UCI race. I knew the level would be something I had never experienced before. Yet it felt very familiar as far as races go. Potentially that could’ve been because I knew a lot of the riders personally on the start line, many of whom I had been racing for years. Maybe it was having Saint Piran, another British continental team, on the start line. All this gave important context to a race I had never experienced. With all this I was excited to see what I would be capable of achieving.

The race started out in typical fashion with a 2.5k neutralised section behind the commissaire lead car. Instead of other people prompting me to think “they are being choppers” in the neutral section, it was in fact me that surely caused everyone else to think like this. I sent it around a traffic island, leaning the bike very sharply. Unfortunately, there was gravel there and my front, and rear, wheel began to wash out. I went into auto pilot and managed to put a foot out and catch myself before completely wiping out. The added benefit to the numerous gains Speedplay pedals can give a rider. If you want an even sharper image of what I am describing, think back to Peter Sagan’s 2012 opening Prologue. [4:33] 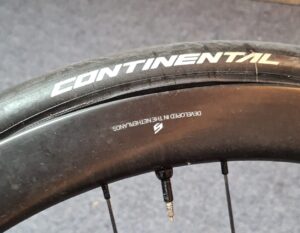 I wasn’t affected by this moment. That was until the race started and the speed picked up. I noticed a violent bump on one section of my rear wheel. I knew in that instance I wasn’t prepared to battle this fatiguing annoyance. I called up the car and proceeded to change my wheel, in a very nippy 36 second rear wheel change. Thanks Team. Straight back into the convoy a kind directeur sportif helped me get back to the main convoy and begin climbing and drafting past all the 23 cars. The important thing, though, is that I grabbed multiple KOMs for the first lap of the race. I was nervous because I had a watchful moto commissaire following my every move.

Into the bunch then, it was frantic and fast, with break after break attempting to go. But each and every one was followed and nothing stuck for the first three hours of the race. It was super-fast racing, bordering the speed limit of the circuit. GP Criquielion is likely to be the hardest 190km race I will do for some time – watch this age well. I proceeded to sit in the peloton until the final 2 laps when I began following moves and keeping myself at the front out of danger. Except that danger came very close to reality on the final lap, where a rider went for a gap locked bars, and swung right across my front wheel. God knows how I held that up, I had that moment of oh f*%$. But I kept it up right. These two riders continued their spat and even quite remarkably managed to create a crash, whilst he rode off into the distance. Honestly, I hope the commissaire got hold of him because that was reckless riding. 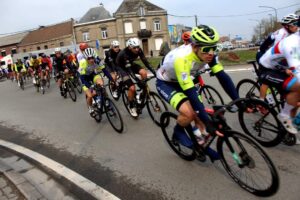 Into the final half a lap, I was near or on the front keeping myself in position for the upcoming narrow lead in to the cobbles. I was where I wanted to be, cruising and floating over the cobbles. Attacks then began to fly over the top of the climb, when I saw no one following I went deep to clamber across and dropped the other guys in the peloton, unfortunately the break didn’t stick.

The downhill into the roundabout was rapid and ominous with the abundance of riders around me gunning for the same narrow entry to the fast turn. I did successfully keep myself in a great position, and kept in the top 10 up the final drag to the line. Gabriel Cullaigh opened up super early with over 450 m to go and everyone followed. I had no legs left after 190k to stand out the saddle. So, my sprint was reserved to a seated affair. I was on the drops though. I kept to my learnings in the last weeks and lunged for the line. Yes, it was for 17th in the sprint and 22nd overall, but getting in the habit is good. Solid opening UCI race in this category. I’ve got a lot of room to keep progressing and developing to get to the front of the race. Lots to come. 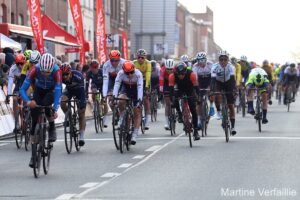 One thought on “GP Criquielion”