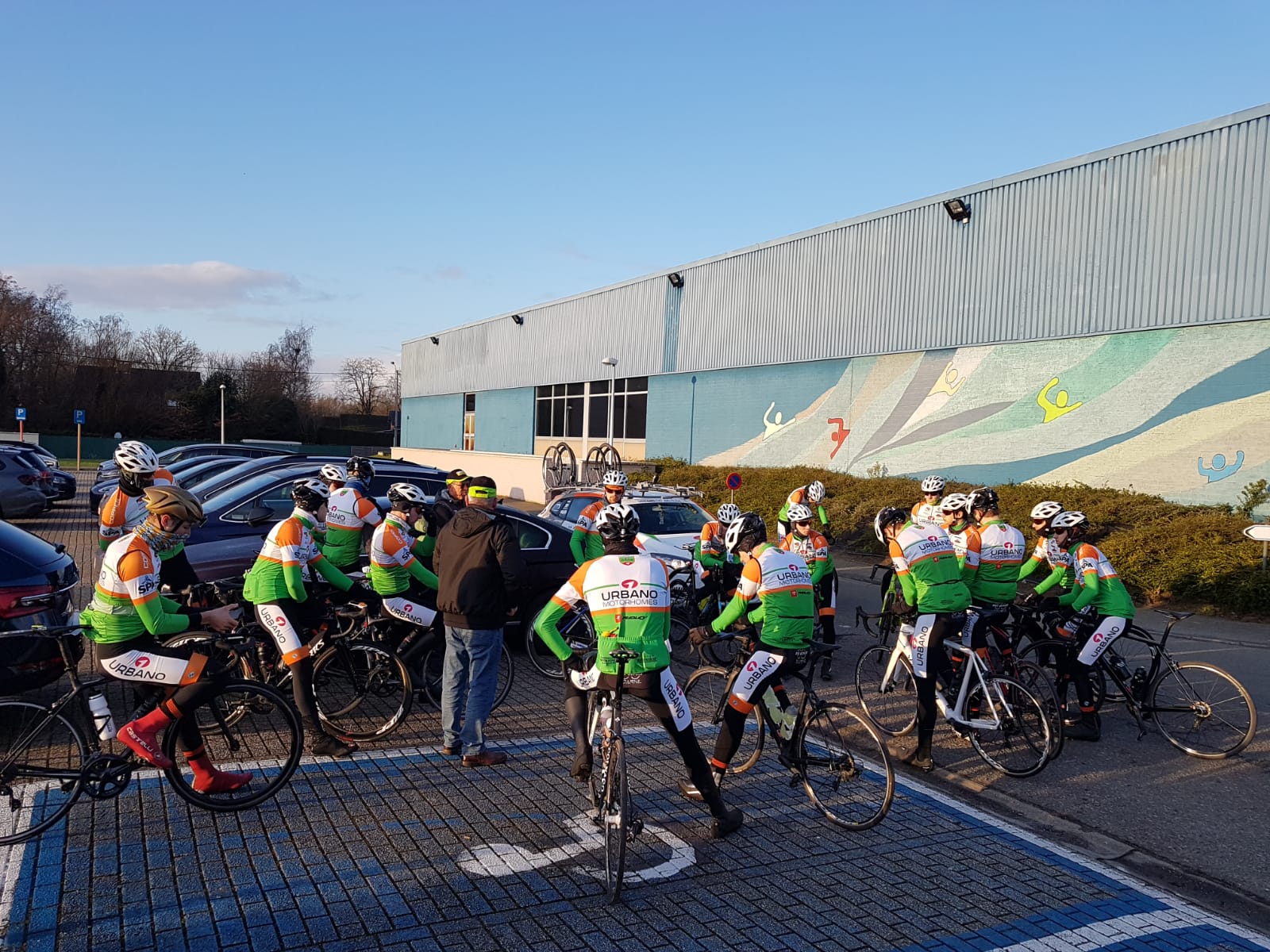 Well, what a day to start off my time at Urbano Cycling Team! The weather was pristine after worries that bad weather and rain would dampen our day, and my first outing with the team. It was quite the opposite. A beautifully sunny day to test the new kit out, with a stiff westerly breeze with the added touch of chill. Overall, not too bad a day for mid-January on the continent.

On Friday evening, after travelling from school to Belgium via the train, I picked up my NEW Urbano Cycling Team kit! My days was it good. The brand was Bioracer, and in my opinion is the best brand for cycling chamois (padded shorts) out there, super comfortable and remained that way for the entirety of the 4.5 hours the next day … but we will get to that a bit later. Next bit of kit was the casual clothes from Errea – you might recognise the name as I believe the support a few football teams as well. Trendy and a cool set of clothes that fit well. Everything you would want from a set of casual clothes to wear before a race. Oh … before I move on, the Bioracer time trial suit is stunning and looks rapid. Mind you, I don’t know how i’m going to fit into it. But that is what a time trial suit is designed to be, no? We will be getting that fitted with a pocket by nopinz shortly for the ease of number placement before a high level event.

I had downloaded the route for Saturday’s ride on Friday, but I couldn’t see how long the ride was. I read what I now know was a previous email saying 100km, but that was very wrong. I then made the rookie error of not bringing enough food for the whole 4.5 hour ride. Due to last week’s ride, on the 11th, being fast according to the managers, we were told to really hold back and not initiate another d*** waving competition.

The first half of the ride flew by in an instant, like we were just rolling doing 10 minute changes on the front so it was taking an age to get to the front and really get some work done. But after the first 2.5 hours passed that was when the clock started to really slow. The fatigue of starting and stopping pedalling all the time really takes the edge out of the legs. We did initiate a chain gang at one point, but unfortunately, it didn’t last very long at all ☹. Next hour, legs started to really fall asleep as the wind bellowed into the face. You never really noticed how much the wind sapped out of you on the return leg, until I sat in the car and begun writing this blog. Anyway, a few sprints felt good to wake the legs, and suggesting a tempo chain gang was a good move so I remained focussed on keeping the mind in a concentrating fashion. Coming to the end, I tried a little sprint to test the legs, and how much power I could put out after 150 kilometres of riding at 32.3 kilometres per hour.

Thanks UrbanoCT for an amazing day, where I felt proud to wear the new, and hopefully, trendy kit. I look forward to trying to race it at the front of the peloton in Belgium this year! Thanks Trainsharp for the continued support in everything, and making me train smarter and better. Hopefully get the same effect as I did with my GCSEs.

I look forward to bringing you, the readers, into this space more this season as I try and focus on producing good content for you to enjoy and provide useful and interesting insight into the world of u23 cycling, which I think is going to be a fun pastime in between the training and racing.

I hope these blogs are interesting to read, and please leave any comments and improvements into the contact form –> here