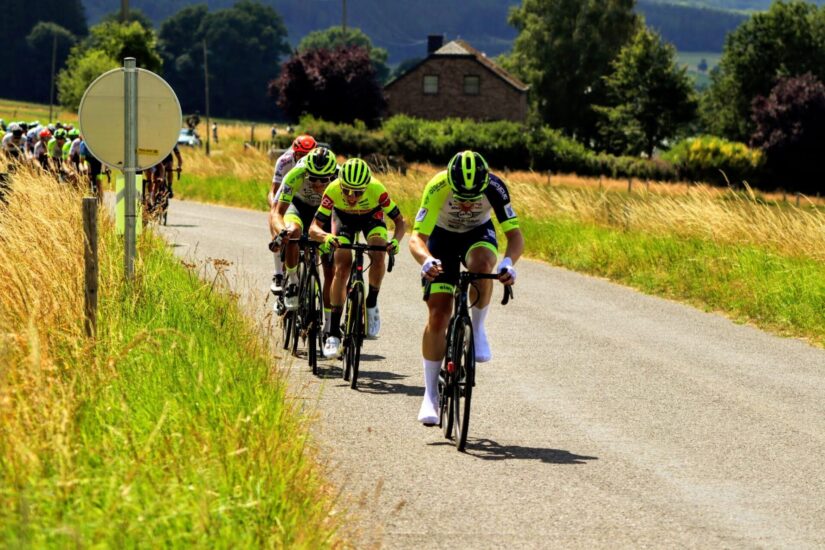 I don’t usually like doing these monthly reports as they’re pretty standard for what you as the reader will see from the junior or under-23 rider whenever they write a blog in the dying moments of the month. For the month of July, however, it seems rather apt that I explain some of the races in a little in the form of a quick race debrief #1. It’s also important so I can have them documented for future hindsight if I find myself in a similar situation again. I also just haven’t had incredible inspiration for other things to write about during this time period. It must be noted, though, I do have a couple of other pieces in mind, which I’ll get to in my time between races.

2.5 weeks at home, which constituted of a bunch of local 1hr criteriums, to manage form, but mainly to see my friends and local competitors whom I hadn’t seen for quite some time. This period culminated with a win at Goodwood RCR Fat Creations Round 1 on the 30th of June which proceeded a long day of travel and racing at Otley GP – the first time I had ridden the event. These little home races I find fantastic to really dial tactics, get the mind in a good place as I’ve mentioned but additionally come down a level to where you can perform relatively easily – that, however, has changed as the level at the don having gone up considerably. The small local criteriums are the perfect grounds to take one step back to go two steps forward, as it were. So yeah that period culminated with a win, which helped knock down a lot of mental barriers I had to winning a race. No matter what anyone says a win is still a win, no matter what level of race. If you win a race it feels good every time. 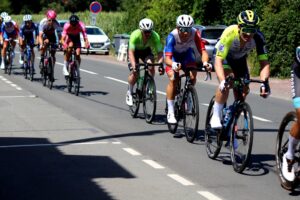 Following this period at the back end of July I took to the start line at Dwars Door Wingene. An interclub of 149km. I discovered, during the warm up, that the course was practically the same as Wingene Koers. An event I rode in September last year, however in the opposite direction. This helped as I knew the key parts of the course and how to handle them in the noticeable wind that was present on that day. The key team of note was Tarteletto Isorex Continental team, who put forward an extremely strong group of individuals. It was important to keep an eye on this team as they had the most strength in depth, and with the wind present on the day I knew they would attempt to split the peloton at some point in the exposed section on the course. With time, they eventually did rail it and create an echelon of 12 riders or so who drilled it full gas in order to make a split happen. 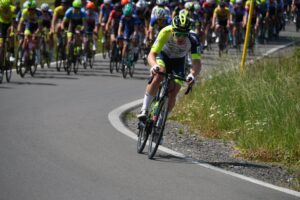 Once this was achieved we had a group of 20 riders in the front, with some riders who were really capable of winning the race. I had been in this position before, and knew the attacks were going to kick off at some point. I just didn’t know when that would be. With each lap that passed I began to grow in confidence in when the attacks would begin once again and the truce be broken. Sure enough that happened with around three and a half laps to go to the finish. I got myself into a group of 5 or 6 riders and we rode in rotation for the next couple of laps. At which point 3 others joined just as the final lap closed in, making 5 riders from Tarteletto in the front. Safe to say I made some alliances in the front group with the other 3 riders who formed the head of the race. With exactly 1 lap to go, Tarteletto were making attacks one after the other. One rider escaped my grasp and I was on the back foot for the first time this race. With half the lap remaining I committed full gas to split away from the leading group. I managed to get away with a Tarteletto rider in tow. He would not pull a turn for the next 7km or 9 minutes of riding as I went full gas to bridge across to the Tarteletto in front. I couldn’t play games with the rider who sat pretty in my wheel, however. This was because every time I looked behind me there was yet another Tarteletto rider trying to bridge across to me dangling just a couple of hundred metres in my wake.

I caught the lead Tarteletto rider, and the one who had sat in my wheel the entire chase jumped hard in the sprint and I was left to settle for 2nd, accepting I did the best race I could have done to get the best chance of the result at the finish. I did good. 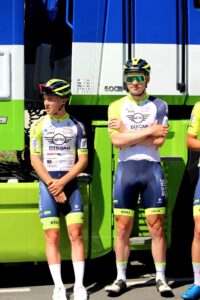 This result at Dwars Door Wingene, led onto the Tour de Liège beginning the following Wednesday. A famous 4-day (usually 5 day) race in the province of Liège. I was excited, albeit very nervous about my prospects for the week ahead, given how many metres of elevation there were. But sure enough the first stage went, alright. I got 17th place and the feelings I had on the climbs gave me sufficient confidence going forward for the upcoming stages.

Stage 2 was a tricky one having completed an almost carbon copy a few months prior at the Triptyque Ardennais. I knew it was a day reserved for the grupetto for me as I saved legs for what lay ahead the following day on stage 3 of the Tour de Liège.

I was told my staff in the team it would be a good day. After a little apprehension, I slowly came around to that way of thinking, and accepted the stage could be a good one for me to achieve a solid result. It played out well, a big break went up the road about half way through the stage and Mini Discar had a rider in there. This meant I could sit in and do no work. We tried to form a train in the peloton but rival teams weren’t having it complaining and having a right go at us.

Coming into the final circuits I thought the stage win was up the road. Completely off the cards for the chasing peloton. But as the laps ticked down, and the peloton ragged it up the ‘climb’ – drag – of the lap we progressively bridged the gap to the large breakaway. The yellow jersey instigated the attacking, and bridged across to this leading group with 1.5 laps to go making a big effort to get across. Being good friends with the yellow jersey I was inspired, and something instinctual clicked in me. My teammate after, my instruction launched it over the top of the ‘climb’ – drag – and led me out for a textbook late bridge to the break, whilst ensuring to gap the peloton. Jasper later bridged back to the front group, and we proceeded to work together to maintain a gap on the peloton, whilst ensuring we came into the finish in a brilliant position to go for the stage win. The whole time we were communicating, but Jasper was going a little hard up the drag. Completely understandable given the peloton, at this point has basically latched onto the back of the big break. I was forced to open my sprint up at 250 m but with a 2-3% inclinethis was an incredibly long sprint after a taxing finale. I finished 3rd behind two Alpecin Deceuninck riders, and one Olympic rower. 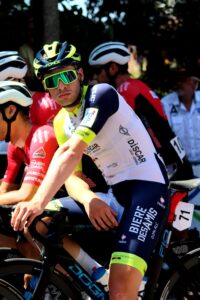 During the month of July, I had two further races in Ekeren Deurne UCI 1.2 and GP Pérenchies UCI 1.2. Both races I experienced bad luck having suffered from a puncture and battling the extreme heat, respectively. I can take a lot of lessons from both, which can help propel me forward.

I can take a lot of confidence and knowledge from just these two races alone. I’ve got Tour de Namur and Ronde van Oost Vlaanderen coming up. Two races I showed a lot of promise at in 2021.